Listen
Add to my selection
Quote this publication Share Print

The present recommendations concern immunocompetent women eligible for cervical cancer screening, aged between 25 and 65, who have not undergone total hysterectomy. Based on current knowledge, the screening recommandation will be the same, irrespective of whether women have been vaccinated against HPV or not. 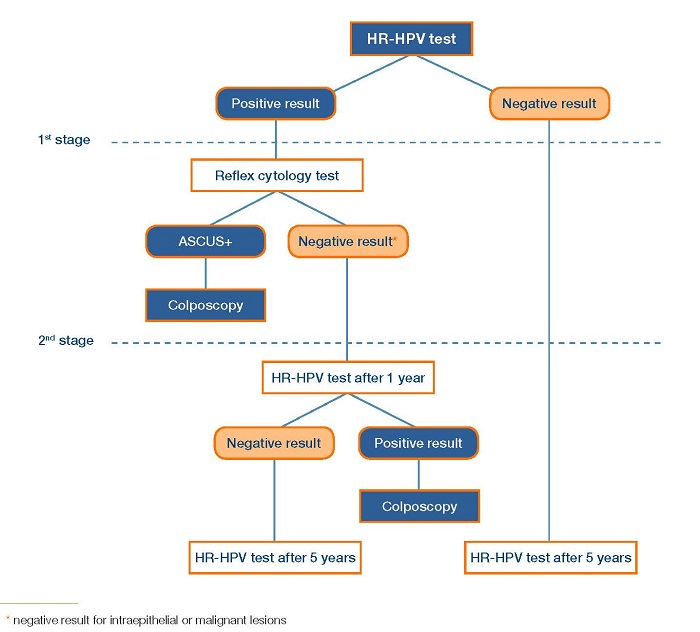 Cervical cancer screening must be part of a global preventive strategy incorporating all the methods of prevention. In particular, this strategy is based on vaccination, the early treatment of precancerous lesions and the appropriate and rapid treatment and management of women with cervical cancer.

Since the Ministerial Order of 4 May 2018, cervical cancer screening in France has been based on an organised national screening programme. The national screening programme is based on current French guidelines for cervical cancer screening, i.e., cytology testing in asymptomatic women aged 25 to 65 years every 3 years, following two consecutive normal tests performed one year apart. In its 2010 guidelines, the HAS considered that switching to the HPV test as a screening test was premature but might ultimately be implemented once organised screening was in place, particularly in terms of coverage and quality assurance measures. Guaranteeing the quality of the cervical cancer screening programme is crucial insofar as this programme is aimed at populations who are not ill and given that it presents associated risks (particularly in terms of unnecessary procedures), is funded collectively and should make it possible to offer treatment of equivalent quality to all participating women, across the whole territory.

In view of the changing context of cervical cancer screening in France and the availability of new scientific data, the Directorate General for Health requested that HAS evaluate the role of the HPV test and the use of p16/Ki67 dual immunostaining in the primary screening strategy for precancerous and cancerous lesions of the cervix.